etol combines comprehensive knowledge of plastics technology with many years of experience in the hygienic requirements of canteen kitchens, canteens, hospitals and caterers. The result is blu’box – the trend-setting series of thermally insulating containers for professional food transport.

The blu’box system, which has been awarded numerous patents, gives the user access to three different transport sizes: blu’box 13, blu’box 26 and blu’box 52. The ingenious modular principle increases variability even further, because it:

Of course etol has also thought of everything in terms of handling. Whether circulating air heating, cooling packs, heating blades, beverage containers, stack locking and much more – all components of the modular system as well as expendable parts are easy to replace.

The material is resistant to washing lye and easy to clean in a commercial dishwasher. The particularly robust material is also extremely resistant to impacts and other mechanical influences – and thus ensures that potential nesting sites for germs and bacteria do not arise in the first place.

It is this versatility that makes the innovative blu’box series one of the leading systems in food transport. 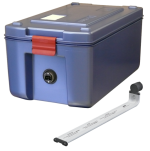 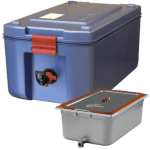 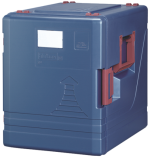 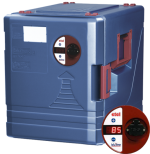 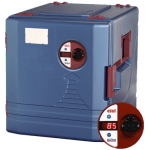 The blu'box 52 is available in Gastronorm (GN) and Gastronorm/Euronorm (GN/EN) versions. Developed for the active and passive keeping of food hot or cold, the modular principle is also used here. All fittings and runners are easily exchangeable.

- blu'box 52 with standard door is suitable for transporting hot and cold food for hours on end.
- The door with integrated convection heating enables food to be kept hot actively (replacement of the standard door with the door with convection heating is done in one step)
- Suitable for accommodating Gastronorm containers (two 1/1 200 mm or their subdivisions)
- Suitable for holding Euronorm trays (up to twelve trays). Functionally this is solved by adjustable stacking grids made of CNS.
- Cooling and keeping food cold by adding the blu'line cool-accus